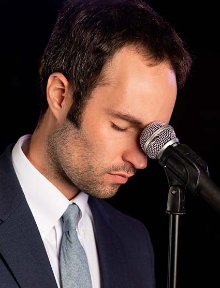 Blake Wexler started doing stand-up at the age of 15 as a high school student in Philadelphia, continued performing in Boston while attending Emerson College, and ultimately moved to Los Angeles in 2011.

In addition to writing for and appearing on Comedy Central & ABC, Blake also has been a featured performer in The Boston Comedy Festival, Seattle Comedy Competition, Laughing Skull Fest, 10000 Laughs and The Aspen Comedy Festival, and can be regularly heard on The Cracked, Daily Zeitgeist & The Todd Glass Show podcasts.
Blake’s critically acclaimed stand-up comedy recordings The Blake Album (2016), Stuffed Boy (2018), Live From The Pandemic (2020) and A Lifetime of Laughter (2021) debuted #1 on the iTunes & Amazon comedy charts, and his album 12 Years of Voicemails from Todd Glass to Blake Wexler charted on Billboard.

With ever-changing guidelines and mandates, please refer to the local government agencies for the most up-to-date information. Customers are expected to take necessary precautions to protect themselves and others.

Management reserves the right to prevent customers from entering the facility who they deem disruptive or dangerous to other patrons.

This show is 18+. Please note, there is a 2-item per person minimum in the showroom. Tickets will be available for pick up at the box office 60 minutes prior to the show.

Blake Wexler started doing stand up at the age of 15 in Philadelphia, and moved to Boston in 2007 to pursue his stand up comedy career and attend Emerson College.

Blake has appeared in the College Humor Live Tour, Rooftop Aspen Comedy Festival, Seattle International Comedy Competition, San Francisco Sketch Fest, and the Laughing Skull Comedy Festival. Philadelphia Magazine named him as one of Philadelphia’s funniest tweeters, and he can be frequently heard on “The Todd Glass Show” and "The Cracked" podcasts.

Blake lives in Los Angeles, where he has written for Comedy Central, will guest star in the final season of Review w/ Forrest MacNeil, and his debut stand-up comedy recording “The Blake Album” debuted near the top of the iTunes charts this year.